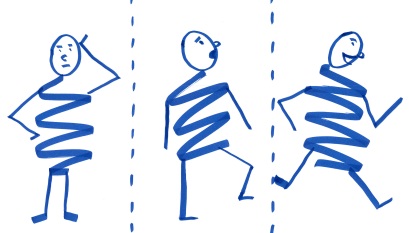 Some of you are probably wondering, “Why does she write about gratitude or courage instead of about conflict resolution?” Fair enough! We’ll get there one day, I promise.

Since then, I have applied this principle to the conflicts I was involved in and it has worked for me every single time. In the process of applying this principle to my own situations, I have realized how crucial it was to heighten my self-awareness and build my own personal foundation. That sturdy foundation consists of healthy and helpful attributes, attitudes, and abilities and courage is one of the human attributes I value and admire most. And I found courage to be instrumental in resolving both intrapersonal and interpersonal conflicts.

Even though I’ve considered myself courageous in general, now, looking back, I clearly see how I was lacking career-related courage until last January. For many years, a number of my GGU professors and classmates, friends, and colleagues at work encouraged me to invest more time and energy in my career, launch a website or blog, or become a communication consultant, and then what happened? – Nothing. I had been unable to make that very first step. Initially I was fearful of limitations in my English language skills, my accent, and my vocabulary. Then I was fearful of the future, recovering from my divorce. Later, a fear of success and a fear of failure simultaneously knocked at my door, leaving me actionless. The last identifiable one was a fear of being unable to find a sufficient amount of time and energy to manage my website and blog in addition to everything else that has been going on in my life.

So, that’s been my long way in a short story of simply naming some of the fears related to my career advancement. Facing and battling those fears eventually sparked a much-needed and long-awaiting awakening of courage which is helping to solve my multiple-year challenge.

How could finding your courage help you?